Training Calisthenics Whilst on Holiday

[fusion_builder_container hundred_percent=”no” equal_height_columns=”no” menu_anchor=”” hide_on_mobile=”small-visibility,medium-visibility,large-visibility” class=”” id=”” background_color=”” background_image=”” background_position=”center center” background_repeat=”no-repeat” fade=”no” background_parallax=”none” parallax_speed=”0.3″ video_mp4=”” video_webm=”” video_ogv=”” video_url=”” video_aspect_ratio=”16:9″ video_loop=”yes” video_mute=”yes” overlay_color=”” video_preview_image=”” border_size=”” border_color=”” border_style=”solid” padding_top=”” padding_bottom=”” padding_left=”” padding_right=””][fusion_builder_row][fusion_builder_column type=”1_1″ layout=”1_1″ background_position=”left top” background_color=”” border_size=”” border_color=”” border_style=”solid” border_position=”all” spacing=”yes” background_image=”” background_repeat=”no-repeat” padding_top=”” padding_right=”” padding_bottom=”” padding_left=”” margin_top=”0px” margin_bottom=”0px” class=”” id=”” animation_type=”” animation_speed=”0.3″ animation_direction=”left” hide_on_mobile=”small-visibility,medium-visibility,large-visibility” center_content=”no” last=”no” min_height=”” hover_type=”none” link=””][fusion_text]I got back from my holiday in New Zealand on Sunday, it’d be fair to say I had an absolutely brilliant time. Amongst the many highlights were skydiving from 16,500 ft, trekking for 3 days through Abel Tasman and watching Bruce Springsteen live in Auckland. I travelled with Jack who is a friend from uni and a weightlifting enthusiast. Jack is going off to South America this week for 4 months and will have very limited access to a gym, so he asked me to teach him a few things whilst we were travelling together.

Our first training came on a walk in Picton, where we challenged ourselves to do a handful of pullups every time we passed a suitable tree. We then happened to chance upon this tree, which was just perfect for doing a Support Press Flag, I managed to hold this one for a few seconds.

We walked for another couple of hours before having a break at a beach, here we proceeded to do a bit of training. I chose the route of doing a few calisthenics, the best of which you can see in the videos below, whilst Jack bicep curled a branch that happened to be on the beach.

On the way back we found a playground, which thankfully wasn’t being used so it made a good opportunity to climb, pullup and have a bit of fun with some calisthenics. I got the opportunity to show Jack inverted rows for when you can’t find a high enough bar and straight dips which are a great exercise for your chest.

Our next opportunity came in Nelson, where we found a football (soccer) pitch with suitable nets for pullups and a human flag.

Whilst here I showed Jack a few variations of the pushup to work his strength a bit more. The archer pushup gave him slight shoulder pain but the close hand pushups proved popular.

After coming back the next day I decided it would be a good time to introduce him to the century test. I refereed his first attempt and it was a solid run, only failing on the pullups where he managed 7.

The Abel Tasman trek was our next workout, 3 days of solid walking whilst carrying our backpacks, I managed to sneak in a nice rope climb as well during the route.

Finally in Franz Josef there was another playground, this had some awkward pullup rings and a firemans pole that were both utilised in our training. Furthermore, we were travelling with a Slovenian girl by the name of Zarja at this point, so she joined us and I gave her a one on one training session. She is travelling for a year so really liked the idea that she could do some strength training without having access to a gym.

Jack has since decided that the century test is going to be his staple whilst travelling; during our final training session we both did 3 century tests in a row. This, I can guarantee you is a lot harder than it sounds. The reason I didn’t attempt a fourth in the end was because I felt pretty sick! Jack still has a little to go to complete the century test but as long as he keeps finding places to do some improvised pullups I’m confident he’ll pass it fairly soon. He has promised to send me a video upon completion.

Finally my top tips for training on holiday: 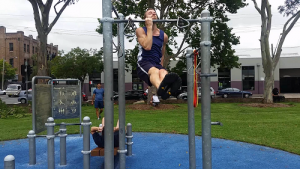 My main calisthenics goal for 2014 has been the one arm pull-up (OAP). At the beginning of 2014, I set my self the rather unrealistic goal of being able to

My Journey Towards the One Arm Pull Up

Upon the request of Coach Paul Wade, I recently wrote a guest post for the PCC blog and Dragon Door, detailing the progressions I’ve made towards the one arm pull-up; 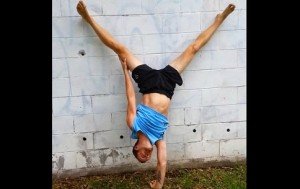 If you’ve been following my blog or YouTube channel, you will have noticed that I’ve been working on the one arm handstand quite a bit recently. I’ve been practising handstands