After reading the tutorials from this introduction to calisthenics, if you only add this exercise to your workouts, then it will have been worth your time.

Paul Wade of Convict Conditioning describes the bridge as the most important exercise and I have to say that I agree with him.

The gluteus maximus is the largest muscle in the human body, its primary responsibility is to keep the trunk erect and for the movement of the hip and thigh.

I have personally experienced a few injury problems caused by weak glutes.

This is caused by weakness in the glutes and tight hip flexors, both of which are primarily from sitting down for too long; the result of this is pressure on the lumbar spine and lower back pain.

Prior to training calisthenics I had weak glutes and quite a bad anterior pelvic tilt; whilst I am still working on reducing this tilt, the regular back pain has disappeared.

Anyone who has done a bit of running will probably be familiar with this rather painful outside of the knee injury, it’s primary cause is weakness in the hip and glutes (mainly the gluteus medius).

I have previously suffered from this injury and have trained one of my friends who had ITB syndrome; in both cases, since we strengthened our glutes, it hasn’t returned.

Many years ago I developed quite a painful hip bursitis in my right leg, this is an inflammation of the bursa (a small sac which functions to reduce friction between two structures such as bones, muscles and tendons) on the side of the hip.

After visiting a physio he recognised that as a result of two rather serious problems with my right leg as a child, my right glute was significantly weaker than my left.

Here are a few pointers to look out for when performing your short bridges:

On the way up you really want to engage the glutes by squeezing them tightly.

Position your arms wherever they feel comfortable.

Before beginning the exercise, take a deep breath in, exhale as you raise your glutes; on the way back down inhale again.

Try to breathe with your stomach rather than your chest as this will engage your diaphragm, intercostals and abdominal muscles to get more strength from your core.

I recommend a 2-1-2 cadence for this exercise, that is two seconds up, one-second hold, two seconds down.

The main muscle used for the Short Bridge is the gluteus maximus and your spinal muscles.

You should be aiming to do the one leg short bridge, before progressing to the more advanced versions of the bridge.

By elevating one leg you can put more weight through the lower leg.

Once this becomes too easy you’re ready for the one leg variation; don’t forget to work both sides. 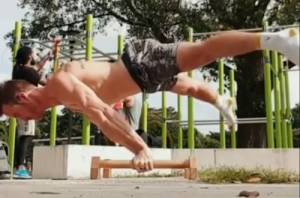 What a perfect time to write my first planche article… Now, I say FIRST because I will be writing a follow-up article once my uhh….. “average form” straddle planche evolves 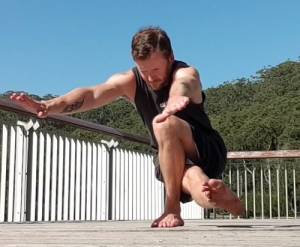 However, athletes are constantly looking for new ways to push their strength potential. Enter the dragon pistol squat!