Last weekend I had the pleasure of attending the PCC in Melbourne. For those of you who have missed this, it is a training course ran by Al and Danny Kavadlo in how to teach Progressive Calisthenics. First off the Kavadlo brothers, these guys are inspirational, incredibly strong and yet so humble. Despite the YouTube fame, they are down to earth, funny guys who happen to be awesome at calisthenics. The course itself was also full of calisthenics enthusiasts, I’ve never trained with this many like-minded individuals at one time. I’ve taken the details of many of them and will find others on Facebook, we’ve already agreed to get together and train sometime, probably at Bondi.

The course itself was great, the first day was Pushups, Pullups, Human Flag and Muscleups. We paired up for the pushups and gradually attempted more difficult versions of the exercise, with Al and Danny demonstrating and giving some really good pointers on how to improve form. Especially useful for me was to concentrate on getting the full body tension, from your legs, through to your glutes and core, all should be rock solid during the pushup.

I had recently blogged about closing in on the one arm pullup, well next up was pullups and after doing a few progressions, Al encouraged us to have a go at jumping into the one arm pullup to give ourselves a bit of upward momentum. My turn, I jumped up, pulled as hard as I could, got full body tension and just managed to get my chin level with the bar. Whilst I would say it was a very long way off being a perfect form one arm pullup, Al counted it and that’s good enough for me. Have to say I’ve had some amazing moments with my calisthenics and running but this eclipsed them all, to get my chin to the bar with Al Kavadlo and a room full of calisthenics enthusiasts encouraging me on was an absolutely incredible experience and one I’ll remember for the rest of my days.

The human flag and muscle up training were both really good, of special interest to me was the progression from the clutch flag to the press flag, which is the support press flag. This was a really difficult exercise but one I’m keen to improve on, though it isn’t at the top of my priority list. As part of the muscleup training, Al demonstrated a false grip muscleup and then down into a front lever, was an awesome move and one I’d like to learn in the future. I had a go at the false grip muscleup but didn’t have enough energy left to get over the bar, I’ve since tried again though and I’ll post a follow up post after this.

The 2nd day was focussed around Squats, Abdominal work, Levers and Bridges. This included a couple of new exercises to improve my bridge, one is the table-top bridge which is especially useful for someone with poor shoulder mobility like myself, the other was a partner assisted bridge, which really enables you to get a great stretch in the upper back. I’ll be using both of these variants in my training sessions. In the afternoon I managed my first back lever and came fairly close with the front lever, need to work on my strength some more to be able to truly pull off these moves.

The final day was focussed around skill based work such as handstands. I just about managed my first ever one arm handstand, I tried it again today but it still needs a lot of work but 2 of my guys, Kamil and Tim smashed it. I’ll be practising this in the coming weeks and months.

Finally, the Century Test! If you’ve been following this blog you’ll know that I do the test every five weeks so I felt confident, but I was pretty tired by this point and have to admit, more than a little nervous. I went in the 2nd group to get it out of the way, and I have to say it went fairly smoothly. The hanging knee raises were actually my worst one. I rushed them, which caused my to swing quite a bit but I got through them okay and earned my PCC t-shirt and certificate. I should also mention the 600 page manual written by Al and Coach Paul Wade which I can’t wait to get started on.

Overall it was an incredible weekend, I learnt a huge amount, got some more inspiration and made quite a few new friends. I’m hoping I’ll be able to train again with Al and Danny in the future when they next come to Australia, in the meantime I’ve warned them they maybe bombarded by videos of me trying to do all these new moves… 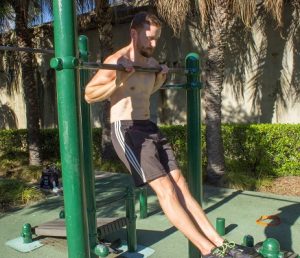 There are many ways that you can vary the form of the standard pull-up.

In this post we shall explore some of these options and offer the benefits and drawbacks to each variation. 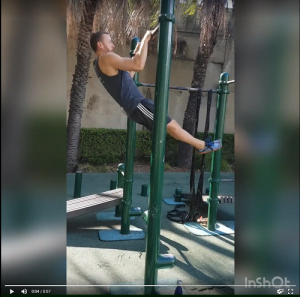 In some disciplines the goal of a muscle-up is to make it efficient, so that you can do as many as possible in a short amount of time. With calisthenics, 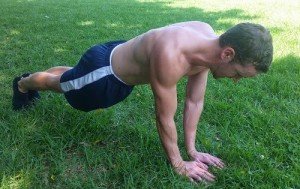 The first progression after full push-ups towards the one arm push-up is the close hand push-up. By moving your hands closer together, it puts more emphasis on your triceps, which will need to grow stronger in order to perform a one arm push-up.