Strong Lifts 5×5 is one of the most famous weightlifting programs on the web, using compound moves it has been proven to get results time and time again.

What better workout to start our Weightlifting Workouts Converted to Calisthenics than the one that many serious weightlifters will have followed.

The 5×5 is a workout that has been around a long time. It’s a proven number of sets and reps to get great strength results.

Mehdi at StrongLifts.com wrote the most in-depth tutorial into a program that features just 5 basic moves:

So the rules for this series is I have to keep as much of the original plan as I can and just adjust the exercises.

In calisthenics we have to change the exercise to keep making it more difficult.

With a plan that limits you to 5 reps, you may need to make small adjustments to the exercise to make it more difficult.

For more information on how to do this, we have a guide on how to progress bodyweight exercises here.

For each exercise, I shall provide some example progressions you can use.

Alternatively, you can use your own progressions.

For the exercises where you have to do both sides, you should build up to doing 5 each side.

We’re going to replace the Barbell Squat with Pistol Squats.

We have a complete pistol squat progression guide here you can follow, otherwise here are some progressions to get you from absolute beginner to insane levels of strength and flexibility.

Each one of these exercises can be progressed in many ways to adjust the difficulty, for example by increasing/decreasing the range of motion.

We’re going to replace the bench press with push-ups, however unlike standard push-ups, we won’t adding reps to increase the difficulty, we will be making the exercise harder.

Here are some progressions to get you going, we have tutorials for some of these, for the others search on YouTube.

The later progressions will require very small adjustments to make them harder, for example, moving the legs one cm closer for your one arm push-ups.

The inverted row is very similar to the barbell row, except you’re rowing yourself to the bar, rather than the other way around.

It works almost identical muscles, except in the later progressions you will have to use your core muscles a lot more to help stabilise.

Here are some progressions to follow, we have some tutorials for these, for the rest search them on YouTube.

A handstand push-up against a wall works very similar muscles to the overhead press.

Unlike the overhead press, we require a certain level of push-up capability before we start pressing overhead.

I’ve kept these all against a wall, otherwise, we’re sacrificing some strength for balance.

I recommend working on free-standing handstand as a separate goal to this workout.

The lever handstand push-up can be started with one arm out to the side and pushing 5 reps to the working arm before swapping. It can be made much more difficult by moving the arm further away and elevating.

This was the most difficult one when it comes to exercise selection.

In the original 5×5 this exercise was the Deadlift, which is a posterior chain exercise. There are some equivalents to deadlifts in calisthenics, but none of them will work your glutes as much as a deadlift.

Therefore, I went with the logical conclusion of replacing the deadlifts with pull-ups. These work the lats and back just like the deadlift, but have little to no work on the legs.

However, with Pistol Squats in both your workouts, you will get as much leg work as you need to build strong legs.

For our pull-ups, we’re going to progress from using a band, all the way through to one-arm pull-ups.

Some of these are isometric holds, in that case, build up the to the time specified.

You can do them with various grips to increase difficulty, pull-ups = overhand, chin-ups = underhand.

The 5×5 converted to calisthenics delivers a great full-body workout that will build strength and a bit of size.

Our calisthenics fundamentals include a vertical and horizontal 5×5 which are not too dissimilar to this workout.

This is to ensure that the “core” muscles are continued to be strengthened. However, the 3 exercises in this workout will still workout your anterior and posterior chain, just to a lesser degree.

If you decide to follow this program, exercising every other day leaves little time for your calisthenics skills, so where should we insert them into the program?

I think for this level of intensity, the one day rest is vital to include, so I wouldn’t add them in there.

After a session, you’re not going to have much strength left to perform at your best for the skills, whereas if you do it before, it will affect your workout.

However, if the skills are important to you, then I would advise doing them before the workout. You may have to reduce the intensity of some of your 5×5 exercises.

One important thing to remember is that your skills will come easier if you are stronger, so try not to skip your strength workouts.

So this was the first in our new series.

We plan to write several articles, converting some of the most famous workout programs to calisthenics.

Do you have a favourite workout you’d like to see as a calisthenics workout? Let us know in the comments below or get in touch with us through the contact page.

The Benefits of Calisthenics for Reducing Lower Back Pain

Let’s face it, most of us will experience some form of back pain. It can be disruptive, limiting our movement and reducing our sense of well-being. We want to heal 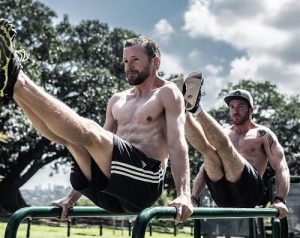 Calisthenics is growing in popularity and for good reason. Performed well and consistently, calisthenics has the potential to be a life-changer for its participants. We love calisthenics! Here are 12